There are days when we need to know God understands our concerns – especially when it comes to taking care of aged parents. My wife and I encountered two unexpected surprises.

29/June/2015. My wife needed to get to Sydney on an earlier flight at the very last minute. I had to change her departure flight one day earlier from 1 July to 30 June. The ticket was a simple lowest cost economy class that was originally booked in April. I requested for the change less than 36 hours before departure. Get this. I got a seat, but here’s the amazing thing…I also got a $7.90 refund. I can understand we have to pay a changing fee (which I did) but I got a shock of my life when I received a refund from Qantas Airways. I had never encountered an instance where I got a refund for changing flights!

What’s so significant about getting a little $7.90 refund? Big deal right? Well it was a big deal. My wife was originally scheduled to go to Sydney on 1 July to attend a family wedding. An unexpected incident happened where her mum suddenly suffered a stroke, and my wife had to rush to see her before 1 July. The bitter-sweet emotion of going to the aid of a loved one, and celebrating a wedding the same week was difficult. 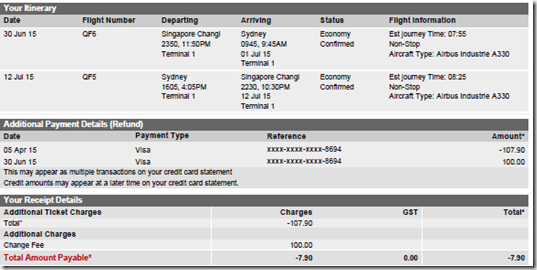 27/Jul/2015. My wife was now back in Singapore. My wife planned to go back to Sydney to see her mum and family again. Her desire was to go on 3 August.  Flights to Sydney were very expensive at this time of the year. I had been monitoring the airfare on Scoot, Qantas, Singapore Airlines over 2 weeks. All expensive. Using my Singapore Airlines frequent flyer points to redeem a seat on the cheapest Economy Saver class at the end of July/early Aug was extremely difficult, to say the least. Frequent flyer seats were available, but they were on a higher class.

On that morning, I logged in to the Singapore Airlines website. What were the chances of getting a Economy Saver seat to Sydney on 3 August? I proceeded to check. To my amazement … lo and behold, there was one available seat at the 8:15pm flight using the Economy Saver class on the 3 August to Sydney. Just one. This was just one week before departure and God provided that one seat needed. I was very encouraged because it is very difficult to redeem frequent flyer seats in general 1 week before departure! I quickly booked the seat. The flight on the A380 was nearly completely full as I was selecting seats for my wife. Once that was done, I checked the Singapore Airlines website, and there were no more Saver seats. 3 days later, I rechecked and basically all the Saver, Standard seats were gone (see below). 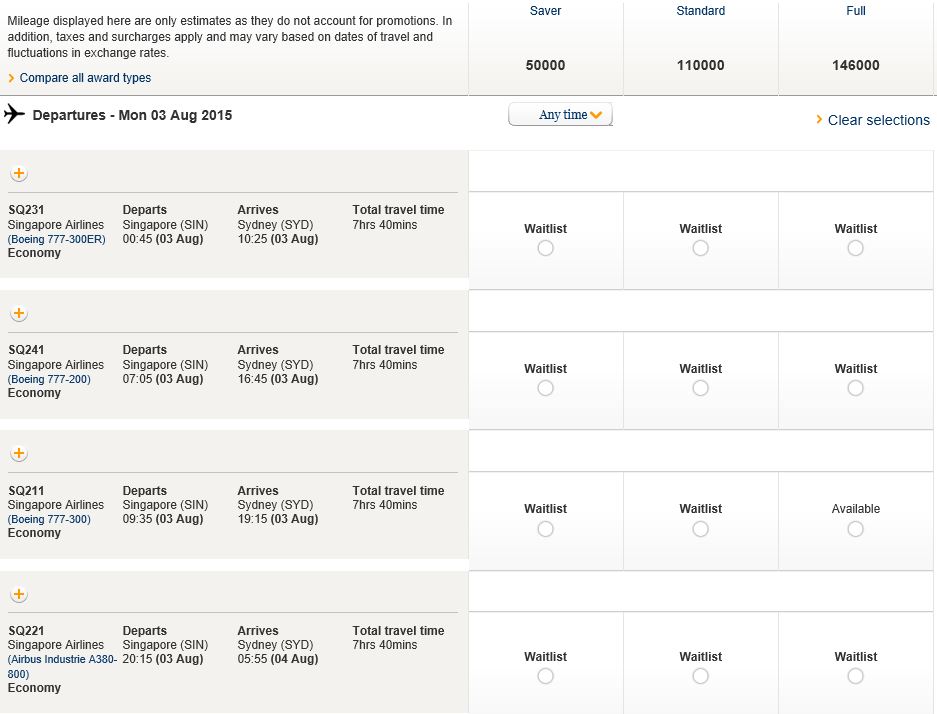 Psalms 18:6 says, “In my distress I called upon the Lord, I cried to my God for help. From his temple he heard my voice; my cry came before him, into his ears”. The $7.90 refund and the ability to get a Saver class seat on the exact day we wanted to go, one week before departure helped my faith fly. Lesson learnt: Pray to God for help when you need it. God can answer you in the most unexpected way.